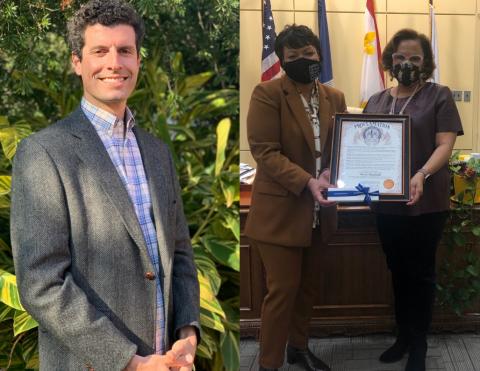 The City’s Parks and Parkways Department, which manages, maintains, develops, beautifies and preserves more than 2,000 acres of New Orleans’ public green space, next week welcomes a new Director, Michael Karam, after the retirement of the current Director, Ann Macdonald.

“For nearly two decades, Ann Macdonald provided steady leadership that included helping restore New Orleans’ tree canopy after it was devastated by Hurricane Katrina. Ann’s leadership also was pivotal in the passing of last year’s Parks Millage and subsequent establishment of the Park Partners, an interagency coordinating council, that will coordinate efforts of Parks and Parkways, NORD, City Park and Audubon Institute,” said Mayor LaToya Cantrell. “While you can never fully replace an Ann Macdonald, we are excited to welcome the leadership that new Director Mike Karam will bring to Parks and Parkways. Mike brings years of experience as a tireless advocate most notably as Board President of Parkway Partners but also as an attorney with our Code Enforcement department. Ann leaves the department in very capable hands.”

“Prior to joining the city in May 2018, I was keenly aware of Ann MacDonald’s tenure as a nearly 30-year civil servant as well as her superior record in leading the Department of Parks and Parkways. Through our work together over last couple years, I have had the good fortune of learning from Ann every day. She will be the first to say that the success of Parkways is not because of her strong leadership, but rather due to the men and women who work every day to keep our city beautiful, clean and verdant even during challenges brought by hurricanes, a pandemic and financial uncertainty," said Deputy CAO of Infrastructure, Ramsey Green. "This is the very definition of leadership. While she may be retiring, Ann’s legacy will live on and continue to convey her purpose: the young trees growing upon our neutral grounds, the fall flowers flourishing in our traffic circles, and the commitment to maintaining our city’s unparalleled, lush landscaping. We will miss Ann at city hall. But we are fortunate to have her legacy with us forever.”

After the storm, the staff lost about 75 employees, down from 250, the Parks and Parkways campus was flooded in addition to its greenhouse, along with approximately 70 percent of the city’s tree canopy. Their campus and buildings were eventually restored, and staffing levels rose to meet the needs of the department. Work to restore the urban tree canopy is still ongoing, but significant progress on that front has been made.
Under her leadership, the first-ever citywide Tree Inventory was created. The tree canopy is a major part of the city’s efforts to implement green infrastructure measures, which helps mitigate flooding, improve resident’s energy costs, and lower greenhouse gas emissions that contribute to climate change. Macdonald has been revered by many and has led the department to perform invaluable work throughout the years.

Michael Karam, her successor, has previously served for six years as an attorney with the Office of Code Enforcement. Karam’s commitment to the urban tree canopy and public green spaces goes back years, from his work as a volunteer planting trees in the Irish Channel and St. Roch with neighborhood associations, to his green space advocacy as Board President of Parkway Partners.

"I'm excited to be a part of a team of such dedicated professionals and look forward getting my hands back in the ground if/when I have time," said Director Karam.

“Through my years of working with Michael, he has demonstrated an ability to foster positive discussions in difficult situations and produce favorable outcomes. He is dedicated, hardworking and recognizes the challenges of municipal government in addition to understanding the importance and value of effective communication with field personnel. His knowledge of greenspace management and maintenance are additional assets that will be very beneficial to this department,” said Macdonald.

“Michael Karam is joining the Department of Parks and Parkways at a time of great challenge facing our city, but he is coming to lead a department with a solid foundation guided by an ethos of honesty, commitment, and resilience. Mike has shown a personal dedication to improving green space as a volunteer in our city and a professional commitment toward ethical leadership as the Assistant City Attorney detailed to the Department of Code Enforcement since 2015," said Deputy CAO of Infrastructure, Ramsey Green. "Mike has a natural rapport that shows he can work with anyone, from lawyers to laborers, to get the difficult jobs done. As the 2021 year begins, with fiscal austerity measures upon us, Mike is charged with continuing the legacy of excellence in Parks and Parkways while bringing new success and relevance, especially in determining the most effective way for the city to maintain the tremendous number of green infrastructure projects soon coming online. This work will make Mike and his department a leader in our city’s resilience. I am greatly excited for Mike to start in this new role leading Department of Parks and Parkways, and am confident his leadership will achieve great things for the department and the city.”